Something to do for St. Ignatius:
I thought this short, but powerful reading about St. Ignatius’ last day would be nice to share with your family at dinner:
A Recreation of the Last Day of ST. IGNATIUS OF ANTIOCH from the St. Ignatius Parish website in Pinellas County, Fl

The Flavian Amphitheater, the Roman Coliseum, the ancient equivalent of the Superdome, was the ancient place for the most popular of all sporting events. It was called the Coliseum because it was built next to a Colossus, a giant statue of the Emperor Nero. It took only 11 years to build it. It featured all three types of columns, Doric, Ionic and Corinthian. It had ventilation all around it. It had the finest travertine marble on its facing. The floor could be flooded for naval demonstrations. The top could be covered with a huge awning to protect the spectators from the sun. On a big day, 50,000 spectators could be seated.

Outside the amphitheater and throughout Rome the ticket sellers would be hawking, "Come to the fights. Come see the gladiators duel to the death." For a few denarii the Roman could see great warriors fight their last battle. "Come to the fight." Perhaps, though, even this got boring to the blood thirsty Romans. The Emperor Trajan put some new enthusiasm into the shows. He condemned Christians to do battle with the wild animals. "Come to the show. Come and see if the Christian God, Jesus Christus, will appear and do battle for his radical followers."

On one particular occasion the show promised to be particularly special. "Today," the ticket sellers announce, "there will be a special show. Ignatius of Antioch, the most powerful follower of Christus of the East, perhaps the most powerful in the entire empire has finally arrived in Rome. It took two years to get him here. Thousands of his companions greeted him at every port trying to convince him to stay with them. He refused to let them bribe the guards. He must think he's powerful enough himself to take on the lions. Come and see this show. Maybe Christus himself will appear."

Fifty thousand people gathered. The crowd was warmed up with a number of duels. After a while they called for this Ignatius, "Come out and do battle." The trumpets blared; the crowd hushed, and out came these Christian warriors. They were dressed in white robes. They wore roses in the hair. An old man with a long beard walked with them. He was identified as Ignatius. This frail man, who had written so much about Jesus, who had led the heretical Christian sect in Antioch, Ignatius, was going to do battle with lions. What a joke.

And it was a joke. And it wasn't much of a show. Ignatius repeated to himself what he had written to his followers. "I am the wheat of God. I must be ground by the teeth of the lions into flour. I must become the pure bread of Christ." Ignatius knelt down and was quickly killed. Christ never did appear to do battle with the beasts. Or did he? After the other Christians died, after the beasts had their fill and were returned to their pens, after the crowds filed out of the stadium, Christians came and picked up the martyrs' roses, strewn throughout the floor of the arena. They recited a psalm for each rose they picked up, the beginning of the prayer later generations would call the Rosary. Perhaps, some of the departing Romans looked back and saw this scene. Perhaps then, they recognized in Ignatius of Antioch, in the Christians who came to gather up the bodies and pray the prayers of roses, perhaps these Romans glancing at this compassionate scene could understand the Power of the Gospel.

To Pray:​
Prayer for the Dead (attributed to St. Ignatius and good for preparation for All Souls Day) Receive in tranquility and peace, O Lord, the souls of your servants who have departed this present life to come to you. Grant them rest and place them in the habitations of light, the abodes of blessed spirits. Give them the life that will not age, good things that will not pass away, delights that have no end, through Jesus Christ our Lord. Amen.
​ 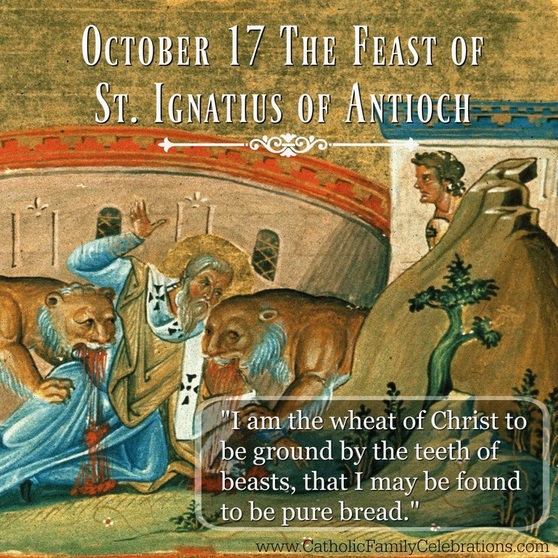