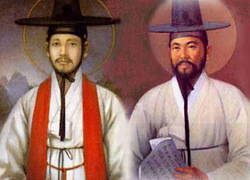 Here's a short bio from articlerich.com

At 15 years old, Saint Andrew Kim was baptized a Catholic and entered the seminary in Macau, a Portuguese colony. In 1845, St. Andrew Kim was ordained a priest becoming the first Catholic priest in Korea.

Saint Andrew Kim went back to Korea after his ordination to spread the word of Jesus Christ. He had to secretly preach the gospel to the Korean Christians because of the great danger of torture and death at the time of the Joseon Dynasty. St. Andrew Kim Taegon became one of the thousands of Korean Catholics martyred in Korea. He was only 25 years old when he was tortured and then beheaded by 12 soldiers who sliced Saint Andrew Kim's neck with their swords. After eight sword strikes, Saint Kim's head was severed. St. Andrew Kim's martyrdom took place on September 16, 1846 at Saenamto.

"This is my last hour of life, listen to me attentively: if I have held communication with foreigners, it has been for my religion and for my God. It is for Him that I die. My immortal life is on the point of beginning. Become Christians if you wish to be happy after death, because God has eternal chastisements in store for those who have refused to know Him."

To Pray: the COLLECT PRAYER from Mass Today:
​O God, who have been pleased to increase your adopted children in all the world, and who made the blood of the Martyrs Saint Andrew Kim Tae-gon and his companions a most fruitful seed of Christians, grant that we may be defended by their help and profit always from their example. Through our Lord Jesus Christ, your Son, who lives and reigns with you in the unity of the Holy Spirit, one God, for ever and ever.

To Eat:
Bulgogi (like a Korean BBQ beef )  and Bipimbap (veggie bowl with an egg) are some our family's favorites. Try something new for your family.  It may become a new favorite.
​(http://allrecipes.com/recipes/700/world-cuisine/asian/korean/)