I thought on this day of celebrating the 3 Archangels, we could remember each one of them throughout the dinnertime meal.

Dessert today should be something angelic like Angel Food Cake.With the number of egg whites in an Angel Food cake, this is one time that I always go for the simplicity, speed, and the money savings of the box mix.When was the last time you made an Angel Food cake? It is very easy and looks like you worked really hard.Serve with thawed frozen strawberries in sugar (or use fresh) and whipped crème. 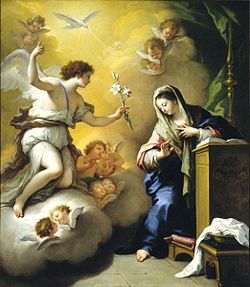 Our first Archangel that we are going to remember is St. Gabriel.Let’s start the meal with the Angelus which begins with Gabriel’s greeting.This prayer is traditionally said 3 times a day, 6am, noon, and 6 pm, but really it can be said anytime.
V. The Angel of the Lord declared unto Mary.
R. And she conceived of the Holy Spirit.
Hail Mary, full of grace,
The Lord is with Thee;
Blessed art thou among women,
And blessed is the fruit of thy womb, Jesus.
Holy Mary, Mother of God,
Pray for us sinners,  Now and at the hour of our death. Amen

V. Behold the handmaid of the Lord.
R. Be it done unto me according to thy word.
Hail Mary, etc.
V. And the Word was made Flesh.
R. And dwelt among us.
Hail Mary, etc.
V. Pray for us, O holy Mother of God.
R. That we may be made worthy of the promises of Christ.
LET US PRAY
Pour forth, we beseech Thee, O Lord, Thy grace into our hearts, that we to whom the Incarnation of Christ Thy Son was made known by the message of an angel, may by His Passion and Cross be brought to the glory of His Resurrection. Through the same Christ Our Lord. Amen. 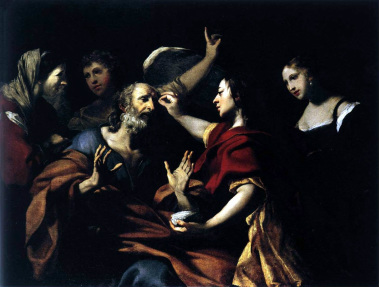 Next I thought it would be nice to take a break before dessert and either tell or read this retelling of the story of St. Raphael. I've copied a version that was in the Magnificat.

The father Tobias was a faithful son of Jacob and was old and worn out by his manifold good works; for many years he had assisted his fellow exiles in every possible way, even burying the slain of Israel during a persecution by Sennacherib, and continuing this practice despite the wrath that king manifested towards him. Having been stripped of all his possessions, he desired to have his son recover a substantial sum of money he had once lent to a member of his family in a distant city. He needed a companion for the young Tobias. God provided that guide in the Archangel Raphael, whom the son met providentially one day, in the person of a stranger from the very area where he was to go, in the country of the Medes. Raphael to all appearances was a young man like himself, who said his name was Azarias (Assistance of God). Everything went well, as proposed; the young Tobias recovered the sum and then was married, during their stay in Media, to the virtuous daughter of another relative, whom Providence had reserved for him.

All aspects of this journey had been thorny with difficulties, but the wise guide had found a way to overcome all of them. When a huge fish threatened to devour Tobias, camped on the shores of the Tigris, the guide told him how to remove it from the water, and the fish expired at his feet; then remedies and provisions were derived from this creature by the directives of Azarias. When the Angel led Tobias for lodging in the city of Rages, to the house of his kinsman Raguel, father of the beautiful Sara, the young man learned that seven proposed husbands had died on the very day of the planned marriage. How would Tobias fare? The Angel reassured him that this would not be his own fate, and told him to pray with his future spouse for three nights, that they might be blessed with a holy posterity. Sara was an only daughter, as Tobias was an only son, and she was endowed with a large heritage.

During the absence of the young Tobias, his father had become blind when the droppings of a pigeon had fallen into his eyes. When the two travelers returned after an extended absence, which had cost his mother many tears, the young Tobias was deeply grieved to find his father unable to see him and his new daughter-in-law. But Raphael told the son how to cure his father’s blindness by means of the gall of the fish; and after the remedy had proved efficacious, all of them rejoiced time in their blessings.

When Tobias the son narrated his story and told his father that all their benefits had come to them through this stranger, both father and son wished to give Azarias half of the inheritance. Raphael declined and revealed his identity, saying he was sent to assist the family of the man who had never failed to obey and honor the blessed God of Israel. Raphael, before he disappeared, said to the family: “It is honorable to reveal and confess the works of God. Prayer is good, with fasting and alms, more than to lay up treasures, for alms deliver from death and purge away sins, and cause the giver to find mercy and life everlasting... When thou didst pray with tears and didst bury the dead, and didst leave thy dinner to hide the dead by day in thy house, and bury them by night, I offered thy prayer to the Lord. And because thou wast acceptable to God, it was necessary that trials prove thee... I am the Angel Raphael, one of the seven who stand before the Lord.”